Erlang is famous for its erlang-supervisor approach, i.e. an actor which is responsible managing it's child actors lifetime (start, restart, shutdown).

In regular C++ code an error (exception) propagates towards the caller-side. In actor-based approach error is supervised by an actor owner (supervisor) and it's up to supervisor to decide how to react, e.g. restart actor but if it crashed no more than 3 times per minute. The caller-side is decoupled from this details at all.

That form of delegating problem upto root supervisor naturally form tree of responsibilities, or, if you like, tree of supervision. This allows to an application slowly degrade and still be available (provide service) when non-fatal errors occur.

Erlang supervisors tolerate even programmer errors; this is known as let-it-crash principle, as a supervisor will just respawn crashed actor.

In C++ we cannot tolerate developer mistakes as in Erlang: there is no reasonable reaction in general to leaked memory or std::abort() call, right? Instead, in C++ world we assume that an actor is able to detect that it is in invalid state, and just terminate, possibly notifying it's exit reason upwards. In the upper layer the actor exit will be observed, and a decision will be made how to handle with the situation.

There is no explicit supervisor role in caf. However, according to documentation caf-monitor, it is possible to subscribe to special system down message and provide appropriate reaction. This can be done in recursive manner, i.e. tree of responsibilities can be build.

However, if I read documentation correctly, any actor can monitor any other actor death. The responsibility of reaction is somewhat blurred from the API perspective. Let's name the approach supervising-via-monitoring.

As the actors are spawned (and owned) by system, the application at the runtime does not creates an hierarchy, i.e. it is flat: 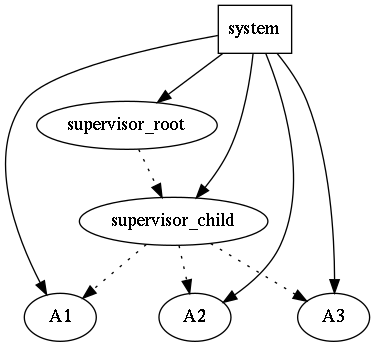 There is actors groupping capabilities in caf, which allows to multicast messages to all actors inside the group, e.g. shutdown messsage.

In sobjectizer actors (agents, in the sobjectizer's terminology) are spawned by cooperation; the cooperation itself is created by environment (the similar role to system in caf). cooperations can create child cooperations, thus making a hierarchy.

However, it should be noted, that cooperation in sobjectizer in not an actor; it is the type provided by sobjectizer and there is no possibility to roll your own implementation.

The cooperation in sobjectizer is some kind of supervisable group of actors, as it requires that all actors to be started and successfully registered; if any of them fails, coorepation will shutdown and unregister all (already registered) actors.

Now follows my own vision how to get fine-gained supervising.

This can be visualized as the following: 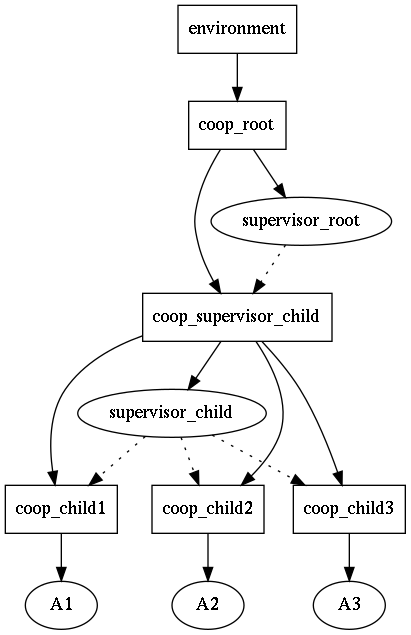 However, this looks a little bit overcomplicated. Indeed, sobjectizer way of supervising is coarse-grained supervising: not individual actors should be supervised, but group of related actors (cooperation). 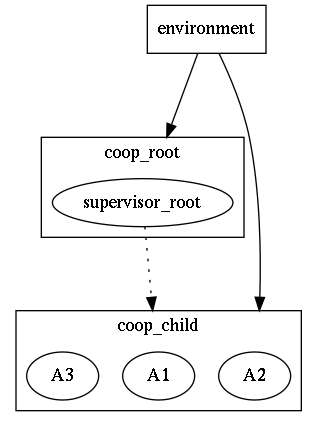 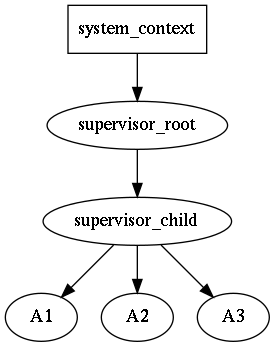 Please note the absence of dotted lines, as they coincide with the solid lines, because the ownership of an actor is the same of supervising it. An supervisor in rotor is also an actor. The supervising hierarchy is naturally formed (unlike in caf), and still there are no doubling of the hierarchy as in sobjectizer, where framework supplied managing units (cooperations) are intermixed with user supplied actors.

However, parent-child relation between supervisors upto v0.02 version was available only for boost-asio based supervisors... because each supervisor incorporated own strand, which was generated by root io_context. That way it was a mixture of execution controller and supervising; so the real picture was like: 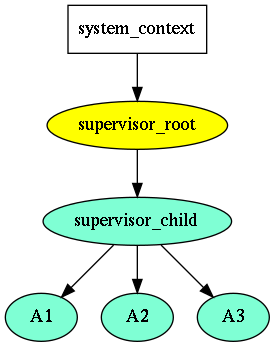 Nonetheless, it imposed the sequential execution context (strand) for every supervisor, while it not necessary was needed. Also, the supervising hierarchy was not available for other event-loops, because strand seems the boost-asio unique feature.

To solve the situation, the locality notion was introduced. Under the hood, it is plain const void* marker. By default, locality just a pointer to root supervisor, if two supervisors has the same locality, they are executed in the same (thread-safe) context. This makes it possible to have supervising trees in all supported event loops in rotor.

How about boost-asio? locality here become a pointer to strand, making it possible to introduce executing context (implies supervising) on demand, i.e. something like this:

This is available in rotor v0.03. (This led to API breaking changes, as now boost::asio supervisor takes strand shared pointer in config).

Messaging in rotor done without private actor's message boxes unlike sobjectizer and caf. Every address (message delivery endpoint) is generated by a supervisor a reference to the supervisor is embedded into the address. So, during messages processing phase by each supervisor, it compared the reference in message destination address with the self (this), and if the match occurs the message was routed locally; otherwise the message was delivered for other supervisor for further (local) routing.

In other words, a message is sent to locality, where all it's supervisors are peers entry points.